Jorge A. Ganoza, President and CEO, commented, "We have reported record quarterly revenue and strong operating margins underpinned by excellent production results and cost performance. We are pleased with our results for the first quarter of 2014 and look forward to a second quarter that reflects the ramp-up at San Jose delivered in April from 1,800 to 2,000 tonnes per day."

Net income was $4.9 million (Q1 2013: $6.7 million) and earnings per share were $0.04 (Q1 2013: $0.05). The decrease in net income in the face of a significant increase in silver and gold production is attributable to a significantly lower metal price environment.

Sales increased 12% in the context of significantly lower realized silver and gold prices (33% and 21%, respectively) as a result of higher silver and gold metal sold (57% and 87%, respectively). Mine operating earnings improved 3% over the first quarter of 2013 while gross margins (mine operating earnings over sales) decreased from 41% to 38%. The impact of lower metal prices on gross margins was offset to a large extent by significantly lower unit cash costs (15% and 7% lower at San Jose and Caylloma, respectively) as well as higher head grades and metal recovery. Net income was further affected by higher share-based compensation charges of $1.7 million mainly related to mark-to-market effects.

Cash flow from operations, before changes in working capital, increased 4% to $16.9 million (2013: $16.3 million). The increase reflects the higher sales of 12% over the prior-year period. 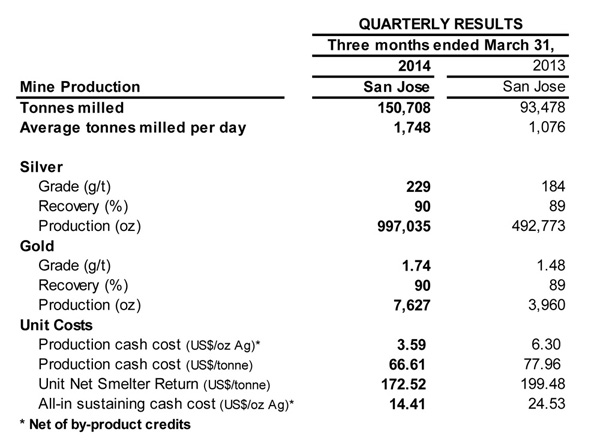 The expansion of the San Jose Mine's processing plant capacity from 1,800 tpd to 2,000 tpd was successfully completed and commissioned in the first week of April 2014. Due to the continuing exploration success at Trinidad North, the company is assessing the economic robustness of a potential expansion of the operation to 3,000 tpd. 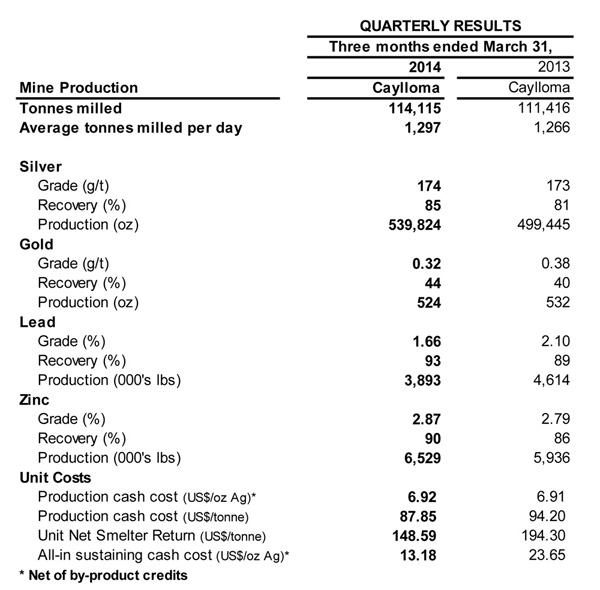 Cash cost per tonne at Caylloma was $87.85/t of processed ore, 7% lower than the first quarter of 2013, and 1% below guidance. This decrease is the result of cost-reducing measures undertaken at the beginning of the third quarter of 2013 which consisted mainly of an optimization in mine preparation activities and reductions in related personnel expenses and technical services. All-in sustaining cash cost per payable ounce of silver at Caylloma was $13.18 (refer to non-GAAP financial measures), below our annual guidance due to lower sustaining capital expenditures in the period.