Jorge A. Ganoza, President and CEO, commented, "We have reported record revenue with strong operating and net margins and a growing year-over-year cash balance in spite of the challenging metal price environment. For the first nine months of the year, the consolidated all-in sustaining cash cost per ounce of silver was $15.12, 12% below annual guidance. We continue to find opportunities to increase productivity and cost reductions that will materialize over the coming quarters." Mr. Ganoza continued, "At San Jose, trade-off and feasibility studies are being completed to expand the San Jose Mine to 3,000 tonnes per day by mid-2016; allowing for a targeted annual consolidated production rate of approximately 9 million ounces of silver and 50,000 ounces of gold."

Net income was $7.8 million (Q3 2013: loss $0.3 million) and basic earnings per share were $0.06 (Q3 2013: $nil). The increase, compared to the same period last year was mainly the result of higher silver sold of 74%, and significantly higher margins at the San Jose Mine despite a 10% decrease of the realized silver price on our provisional sales to $19.14 per ounce of silver. In addition, net income was positively affected by mark-to-market effects on share-based compensation resulting in a recovery of $0.8 million compared to a charge of $1.3 million in the comparative period.

Mine operating earnings increased 105% over the third quarter 2013, while gross margins (mine operating earnings over sales) increased from 27% to 36%. The impact of lower metal prices on gross margins was offset to a large extent by significantly lower unit cash costs at the San Jose Mine, down 15%, as well as by higher head grades and metal recoveries for silver and gold.

Liquidity available today to the company is approximately $112.3 million which is composed of $72.3 million in cash and short term investments, and an undrawn $40.0 million revolving credit facility.

The company's 2015 budgeting process is in its final stages and management has begun implementing measures to further improve operational efficiencies and mine plans. As of the beginning of the fourth quarter, management has moved to make 20% and 7% reductions in the corporate and Peruvian subsidiary head counts, respectively, amounting to net annual savings of approximately $1.5 million. The company continues to work diligently to keep identifying areas where savings can be realized without hindering our ability to keep sustaining organic growth.

All-in sustaining cash cost per payable ounce of silver for the third quarter 2014, net of by-product credits, decreased to $11.85 (Q3 2013: $19.31) as a result of lower sustaining capital and brownfields exploration expenditures and higher payable ounces of silver; refer to non-GAAP financial measures. 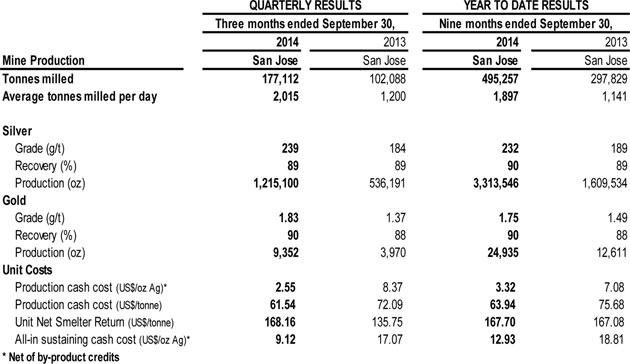 The San Jose Mine was successfully expanded to 2,000 tpd in April 2014 (see Fortuna news release dated April 14, 2014). Trade-off and feasibility studies for a potential expansion to 3,000 tpd are in their final stage. 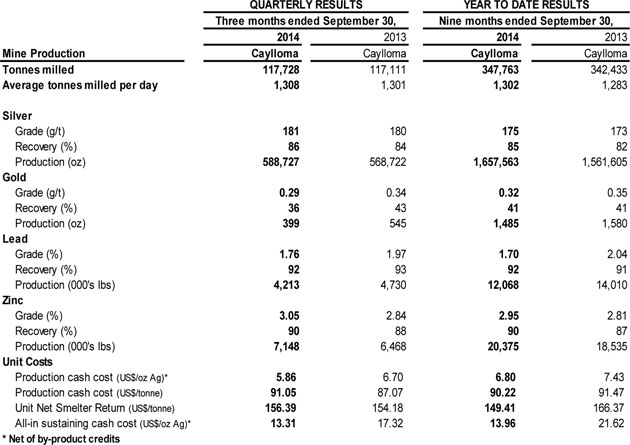 Cash cost per tonne at Caylloma for the third quarter 2014 was $91.05 per tonne of processed ore, an increase of 5% from the third quarter 2013 and 3% above annual guidance. All-in sustaining cash cost per payable ounce of silver, net of by-product credits, was $13.31 and $13.96 for the nine months ended September 30, 2014, the quarter is 22% below annual guidance of $17.01; refer to non-GAAP financial measures. Management expects cash cost to be in line with annual guidance with the execution of capital expenditures in the fourth quarter.