August 27, 2014: Fortuna Silver Mines Inc. (NYSE: FSM | TSX:FVI | BVL: FVI | Frankfurt: F4S.F) is pleased to announce an updated Mineral Resource estimate as of June 30, 2014 for the San Jose Mine located in Oaxaca, Mexico. Included in the San Jose mineral resources is an updated estimate of the Mineral Resource for the Trinidad North discovery based on the completion of forty-one additional step-out and twelve infill drill holes in the Trinidad North area.

"Brownfields exploration drilling has been very successful in the past year at extending the Trinidad North mineralization a further 200 meters to the north," commented Dr. Thomas Vehrs, Vice President of Exploration for Fortuna Silver. "High-grade silver-gold mineralization at Trinidad North remains open to the north and to depth. Underground access and new drilling chambers are currently in preparation to allow for exploration of an additional 250 meter extension of the mineralized system with drilling projected to start from the new drill chambers in September of 2014."

Step out drilling of the Trinidad North Discovery during the latter half of 2013 and the first half of 2014 confirmed the continuation to the north and to depth of the Bonanza and Trinidad vein structures, as well as identified three new mineralized domains comprising two new Stockwork Zones and a new Trinidad Footwall vein. These contributed 3.6 Mt of Inferred Resources averaging 387 g/t Ag Eq containing an estimated 45.3 Moz Ag Eq. In addition the step out drilling resulted in the re-interpretation and adjustment of existing Inferred Resources contributing a further 1.4 Moz to the resource inventory.

Included in the above reported resources at a 100 g/t Ag Eq cutoff are Indicated Resources totaling 0.5 Mt containing 6.3 Moz of silver and 41.3 koz of gold along with 4.8 Mt of Inferred Resources containing 43.5 Moz silver and 278.8 koz gold corresponding to the Trinidad North discovery.

The above tables summarize the Trinidad North Indicated and Inferred Resources at a range of Ag Eq cutoff values. Of significant importance is the presence of high-grade mineralization in the Trinidad North Discovery. As shown, silver and silver equivalent grades increase substantially at cutoff grades of 100 g/t Ag Eq or higher.

Drill hole and channel samples were used in conjunction with underground mapping to construct three dimensional wireframes defining individual vein structures. Samples were selected inside these wireframes, coded and composited. Boundaries were treated as hard with statistical and geostatistical analysis conducted on composites for each vein. Silver and gold grades were estimated into a geological block model representing each vein. Primary veins including Bonanza, Trinidad, Fortuna and the Stockwork Zone were estimated by Sequential Gaussian Simulation. Secondary veins were estimated by inverse power of distance. Estimated grades were validated globally, locally, and visually prior to tabulation of the Mineral Resources.

Updated Mineral Reserves for the San Jose Mine are currently in preparation and will be reported upon completion.

Following detailed geological and geotechnical logging, all exploration and infill drill core samples are split on-site by diamond sawing. One-half of the core is submitted to the ALS Chemex Laboratory in Guadalajara, Mexico. The remaining half core is retained on-site for verification and reference purposes. Following preparation, the samples are assayed for gold by standard fire assay methods with an atomic absorption finish and for silver and base metals by standard ICP methods utilizing aqua regia digestion. Over limit values for gold and silver are assayed for fire assay methods with a gravimetric finish. The QA-QC program includes the blind insertion of certified reference standards and assay blanks at a frequency of approximately 1 per 15 normal samples. Field duplicate, laboratory duplicate and preparation duplicate samples are included for purposes of verification of sampling and assay precision levels. Pulp samples are also routinely submitted to an external laboratory for check assay purposes.

All results of the QA-QC program are routinely monitored on a sample lot basis, monthly and quarterly to assess the accuracy and precision of the sampling and analytical processes.

The Mineral Resource estimate has been prepared under the supervision of Eric Chapman of Fortuna Silver Mines Inc. Thomas Vehrs, Vice President of Exploration for Fortuna Silver Mines, is responsible for ensuring that the information contained in this news release is an accurate summary of the original reports and data provided to or developed by Fortuna Silver Mines. Dr. Vehrs is a Founding Registered Member of the Society for Mining, Metallurgy, and Exploration, Inc. (SME Registered Member Number 3323430RM). Both E. Chapman and Dr. Vehrs are Qualified Persons as defined by the National Instrument 43-101.

Fortuna is a growth-oriented, silver, gold and base metal producer focused on mining opportunities in Latin America. Our primary assets are the Caylloma silver mine in southern Peru and the San Jose silver-gold mine in Mexico. The Company is selectively pursuing additional exploration and development opportunities. For more information, please visit our website at www.fortunasilver.com. 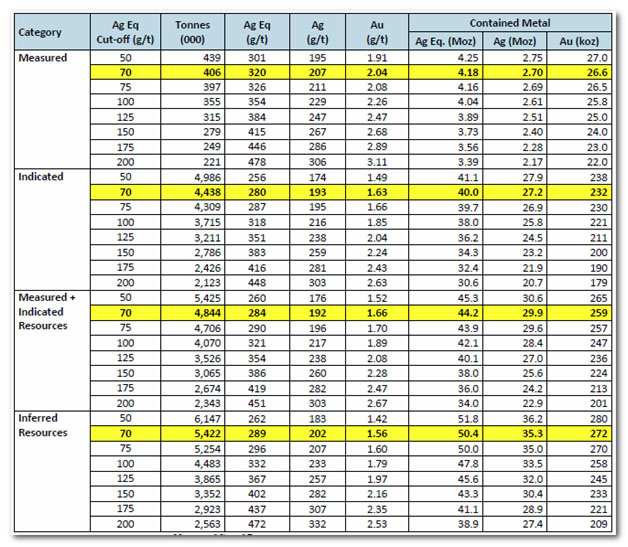