Jorge A. Ganoza, President and CEO, commented, "2014 has been another remarkable year for the company in spite of a 20 percent reduction in realized silver price year over year. We exceeded our production guidance and improved operating margins through higher productivity and cost reductions. Our AISCC decreased to $14.48 per ounce of silver from $20.45 in 2013. The company has a strong financial position with $77 million in cash and an untapped credit facility of $40 million." Mr. Ganoza continued, "As we embark on a 50 percent expansion of the San Jose Mine this year, we expect our AISCC to continue to decrease upon commissioning in mid-2016; further consolidating Fortuna's position as a low cost silver producer."

Mine operating earnings increased 44 percent over the prior year, while gross margins (mine operating earnings over sales) increased from 30 percent to 35 percent. The impact of lower metal prices on gross margins was offset to a large extent by significantly lower unit cash costs, 12 percent lower at San Jose and 1 percent lower at Caylloma, and higher head grades and metal recovery for silver and gold.

Cash flow from operations, before changes in working capital, increased 46 percent to $59.8 million (2013: $40.9 million), reflecting 27 percent higher sales and improved margins, from the prior year.

Fourth quarter 2014 net income amounted to $0.1 million (Q4 2013: loss $14.9 million), resulting in basic earnings per share of $nil (Q4 2013: loss $0.12). Net income was negatively affected by restructuring and severance costs of $1.1 million and higher share-based compensation of $1.4 million, compared to fourth quarter 2013, related to mark-to-market effects from share appreciation. Silver sold increased 16 percent to 1,611,313 ounces while the realized silver price decreased 21 percent to $16.33 per ounce from the same period in the prior year.

For the three months ended December 31, 2014, the company's adjusted net income was $0.2 million (2013: $3.0 million) related to the non-cash impairment of inventories of $0.1 million. The decrease in adjusted net income was driven by lower silver price, a $1.1 million restructuring and severance costs and a higher share-based compensation expense.

Consolidated all-in sustaining cash cost per ounce of payable silver for 2014, net of by-product credits, was $14.48, 18 percent below annual guidance, as a result of higher payable ounces of silver, lower capex, and lower unit costs (2013: $20.45). 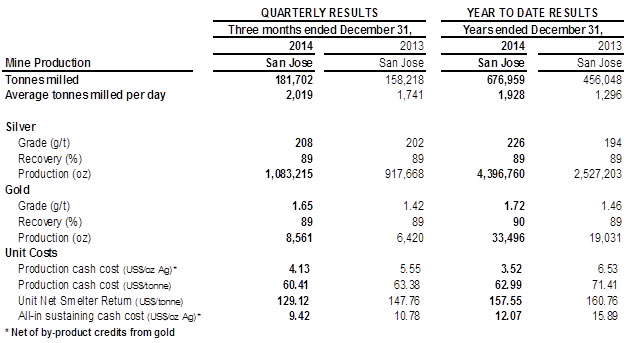 Production for the year ended December 31, 2014 was 4,396,760 ounces of silver and 33,496 ounces of gold, 74 percent and 76 percent, respectively, above the prior year's production. The increases are the result of higher throughput of 48 percent and of higher head grade for silver and gold of 17 percent. The San Jose Mine and processing plant were expanded to 2,000 tpd in April 2014 (see Fortuna news release dated April 14, 2014). Compared to guidance for the year, silver and gold production were 10 percent and 9 percent higher, respectively.

Cash cost per tonne of processed ore for the year ended December 31, 2014 was $62.99/t, or 12% below the cost in the prior year due mainly to higher throughput, a 4% devaluation of the peso, and lower mining cost related to support and preparation, and below the annual guidance of $67.10/t. All-in sustaining cash cost per payable ounce of silver, net of by-product credits, was $12.07 for the year ended December 31, 2014, below the annual guidance of $14.43. 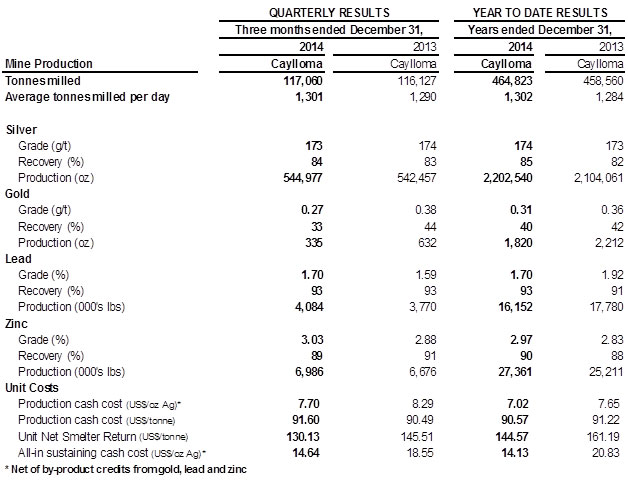 The financial statements and MD&A are available on SEDAR and have also been posted on the company's website at www.fortunasilver.com/s/financial_reports.asp.

Fortuna is a growth oriented, silver and base metal producer focused on mining opportunities in Latin America. Our primary assets are the Caylloma silver Mine in southern Peru and the San Jose silver-gold Mine in Mexico. The company is selectively pursuing acquisition opportunities throughout the Americas. For more information, please visit our website at www.fortunasilver.com.