Jorge A. Ganoza, President and CEO, commented, "We continue to focus on cost control, productivity and margins. Mine plan flexibility at Caylloma and strong performance at San Jose continue to sustain our operating and financial results in spite of a challenging metal price environment." Mr. Ganoza continued, "Key capital projects remain on schedule as we look forward to the commissioning of the San Jose Mine expansion from 2,000 to 3,000 tpd in mid-2016."

Net income amounted to $0.2 million, down from $2.9 million a year ago, resulting in basic earnings per share of $nil (Q2 2014: $0.02). Net income was affected by a 12% reduction in sales as a result of 17% lower realized silver price compared to Q2 2014. The negative effect from metal prices was partially offset by lower unit costs at both mines and by lower selling, general and administrative expenses of 36%. Net income was also affected by a higher deferred income tax provision as a result of the devaluation of the Mexican peso and the Peruvian nuevo sol. As a result of this the effective tax rate for the quarter was 95%. Without the impact of the foreign exchange devaluation the estimated effective tax rate would be 71%.

General and administrative expenses were $5.5 million down 36% from $8.6 in Q2 2014. The decrease is related to a lower charge on share-based compensation of $2.1 million from mark-to-market effects, lower corporate expenses of $0.6 million and lower foreign exchange impact of $0.3 million. 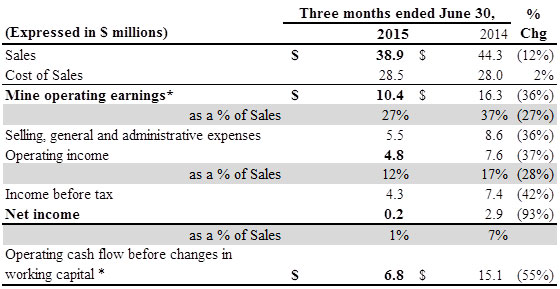 Silver and gold production for the second quarter and six months ended June 30, 2015, increased over the same period in the prior year 3% and 6% and 4% and 13%, respectively, explained largely by the impact of the commissioning of the San Jose expansion from 1,800 to 2,000 tpd in April 2014. The Company is on track to meet its annual production guidance of 6.5 million ounces of silver and 35.3 thousand ounces of gold or 8.6 million ounces of Ag Eq*.

AISCC decreased to $14.47 (Q2 2014: $17.41) as a result of higher payable ounces of silver and lower sustaining capital expenditures. AISCC is expected to be in line with annual guidance of $16.61 as the accrual of investments of our main projects accelerates in the second half of the year. 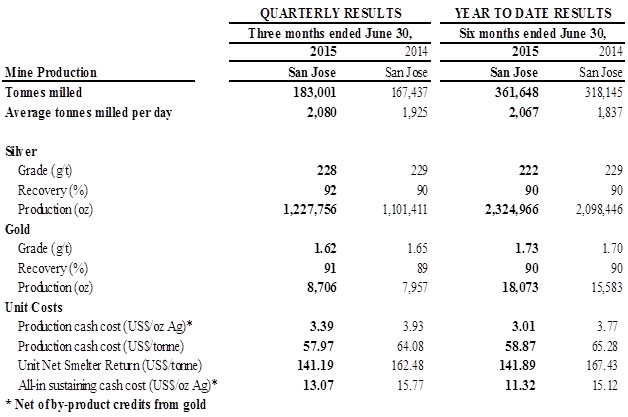 Production for the second quarter was 1,227,756 ounces of silver and 8,706 ounces of gold, 11% and 9% increase, respectively, over Q2 2014. Increase in production is the result of 9% higher throughput and metallurgical recoveries above plan. With respect to budget, silver and gold production was 10% and 3% higher, respectively.

Work on the third expansion of the San Jose Mine from 2,000 to 3,000 tpd is moving ahead according to schedule. Detail engineering work is well advanced and purchase orders for major equipment have already been placed; commissioning is planned in mid-2016. 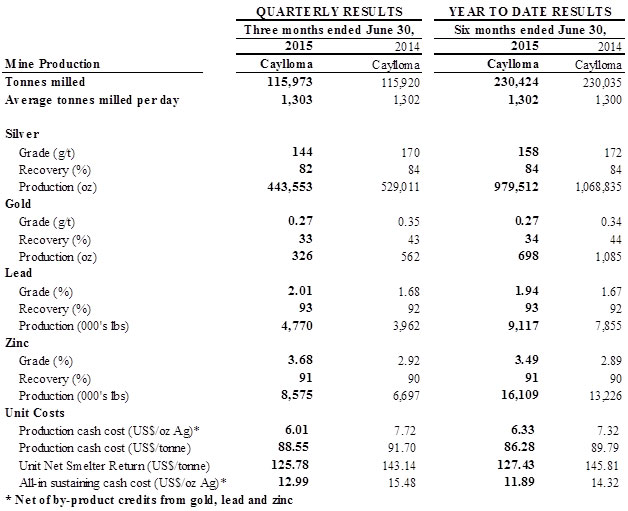 The drop in silver production was related to higher than expected internal dilution and to adverse geotechnical conditions, which limited achieving programmed tonnage in Level 6 of the Animas Vein. To offset the Level 6 production issues, mining was shifted to more base metal-rich levels within the Animas Vein, resulting in higher than budgeted grades for lead and zinc.

Shareholders, analysts, media and interested investors are invited to listen to the live conference call by logging onto the webcast at: http://www.investorcalendar.com/IC/CEPage.asp?ID=174177 or over the phone by dialing just prior to the starting time.

Fortuna is a growth oriented, silver and base metal producer focused on mining opportunities in Latin America. Our primary assets are the Caylloma silver Mine in southern Peru and the San Jose silver-gold Mine in Mexico. The company is selectively pursuing acquisition opportunities throughout the Americas. For more information, please visit our website at www.fortunasilver.com.