Jorge A. Ganoza, President and CEO, commented, "We have had yet another quarter of strong operating and financial results at our operating mines in Peru and Mexico, positioning the company well on track to meet our annual production targets and financial objectives." Mr. Ganoza continued, "Having announced a positive construction decision for our Lindero gold Project in Argentina, we expect free cash flow from our operations to contribute significantly towards the funding of the construction capital requirements." 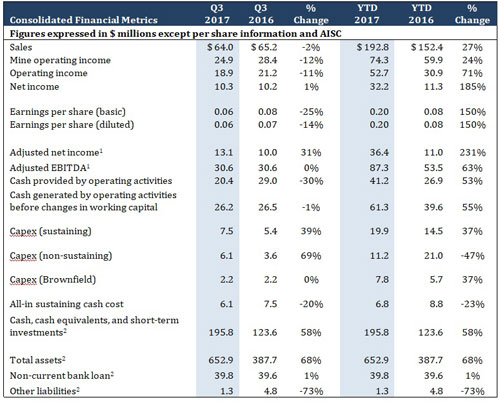 Note
1 refer to Non-GAAP Financial Measures
2 Comparative figures are as at December 31, 2016

Net income for the third quarter ended September 30, 2017 was $10.3 million or $0.06 per share compared to a net income of $10.2 million or $0.08 per share for the comparable quarter in 2016. The slightly higher net income was driven mostly by lower income tax expense of $5.2 million as the effective tax rate for the third quarter was 34.7% compared to 51.2% for the comparable quarter in 2016. Adjusted net income was $13.1 million compared to $10.0 million in 2016, mostly after adjusting for a $2.2 million loss on financial instruments, net of tax, in the current quarter.

Operating income for the third quarter ended September 30, 2017 was $18.9 million, 11% below the comparable quarter in 2016, attributable mostly to lower financial results at our San Jose Mine related in turn to a lower realized silver price of 14% and higher unit costs of 13%. These were partially offset by stronger financial results at our Caylloma Mine driven by strong zinc and lead prices and lower share based payments of $0.1 million, compared to $2.6 million in the third quarter of 2016. 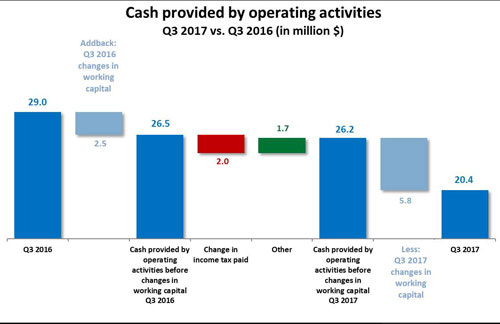 The Company is in the process of amending its existing credit facility with Scotiabank from $40 million to $120 million. This will provide an additional $80 million of liquidity on top of the $40 million which have been drawn as of September 30, 2017 and completes our funding requirement for the construction of the Lindero Project.

1Net of by-product credits from gold

Cash cost per tonne of processed ore for the third quarter ended September 30, 2017 was $62.2, which includes approximately $0.6 per tonne of non-recurring items mainly related to mine support works due to a major earthquake in September and $0.70 per tonne due to the appreciation of the Mexican Peso against the US dollar. Excluding non-recurring items and exchange rate effects the increase compared to budget was 4% and was related to higher mine support cost and local inflation on the cost of energy and materials. Cash cost per tonne of processed ore for the quarter was 13% higher than the $54.8 cash cost for the comparable quarter in 2016. Cash cost for 2017 is expected to remain within 5% of annual guidance (see Fortuna news release dated January 11, 2017).

All-in sustaining cash cost per payable ounce of silver, net of by-product credits, was $7.4 for the first nine months of 2017 and was below the annual guidance of $8.4 as a result of higher gold credits. 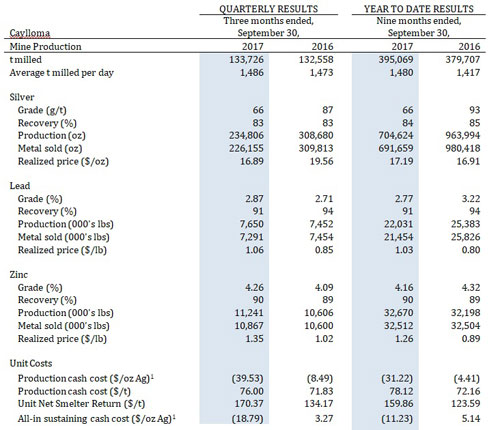 1Net of by-product credits from gold, lead and zinc

Cash cost per tonne of processed ore for the third quarter ended September 30, 2017 was $76.0, which was 6% higher than the $71.8 cash cost for the comparable quarter in 2016 and 1% higher than budget. The increase over the third quarter of 2016 was mainly due to higher energy, ground support and labour costs. Cash cost for full year 2017 is expected to remain within 5% of annual guidance (see Fortuna news release dated January 11, 2017).

All-in sustaining cash cost per payable ounce of silver, net of by-product credits, was a negative $11.2 for the first nine months of the year and was significantly below the annual guidance of $10.8 due primarily to higher by-product credits.

The financial statements and MD&A are available on SEDAR and have also been posted on the Company's website at http://www.fortunasilver.com/s/financial_reports.asp.

Fortuna is a growth oriented, precious metal producer focused on mining opportunities in Latin America. The Company's primary assets are the Caylloma silver mine in southern Peru, the San Jose silver-gold mine in Mexico and the Lindero gold project in Argentina. The Company is selectively pursuing acquisition opportunities throughout the Americas and in select other areas.