Vancouver, January 17, 2018--Fortuna Silver Mines, Inc. (NYSE: FSM) (TSX: FVI)is pleased to announce 2017 production figures from its two underground operating silver mines, the San Jose Mine in Mexico and the Caylloma Mine in Peru.  The company produced 8.5 million ounces of silver and 56.4 thousand ounces of gold or 11.9 million AgEq1 ounces.

Note: 1. Silver equivalent is calculated using silver to gold ratio of 60 to 1 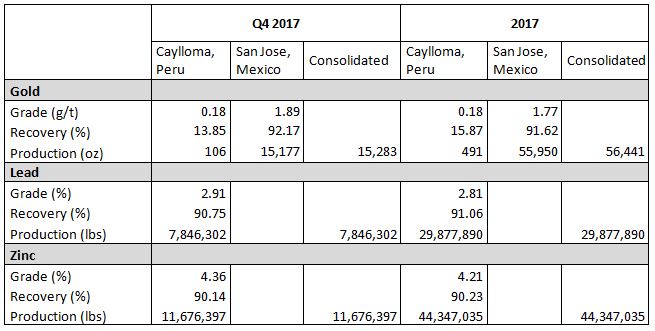 Note: Metallurgical recovery for silver at the Caylloma Mine is calculated based on silver content in lead concentrate

In 2017, mine production was sourced from Trinidad Central and Trinidad North with each area contributing 57 % and 43 % of ore respectively.  The processing plant treated an average of 3,035 tpd.

In 2017, mine production was sourced primarily from the Animas NE and Animas Central areas with each contributing 58 % and 32 % of ore respectively.  The processing plant treated an average of 1,484 tpd.

Selected milestones from the project construction schedule were released on December 2017 (see Fortuna news release dated December 21, 2017) and include:

Brownfields exploration program budget for 2018 at the San Jose Mine is $8.4 million, which includes 45,500 meters of diamond drilling and 340 meters of underground development for drilling access and platforms. Exploration drilling will focus on the Trinidad Central and Trinidad North zones and on the sub-parallel Victoria vein.

Brownfields exploration program budget for 2018 at the Caylloma Mine is $2.2 million, which includes 10,250 meters of diamond drilling. Drilling will focus on a previously unexplored area between ore shoots on the Animas NE vein that were discovered in 2017 (see Fortuna news release dated October 11, 2017).

The Arizaro gold-copper porphyry target lies within the Lindero Project concession block. We plan to investigate the economic potential of including Arizaro mineralization into the existing Lindero resource through additional surface mapping and 2,000 meters of core drilling targeting shallow, high-grade copper-gold mineralization with a budget of $321,000.

The Company is also revisiting the extensive reconnaissance exploration database comprising over fifteen years of sampling and generative work in northern Argentina, acquired from Goldrock Mines along with the Lindero Project in 2016. Evaluation of new opportunities on third-party properties is ongoing.

Exploration work on the Tlamino joint venture will consist of 2,000 meters of core drilling with a budget of $340,000. Fortuna retains the right to nominate a second Selected Property over the course of 2018. Exploration remains centered on high and low-sulfidation epithermal gold-silver mineralization in the western portion of the Tethyan orogenic system. Each joint venture, when formed, will allow Fortuna the right to earn a 51 % interest by spending $3.0 million over three years, and gain an additional 19 % interest by spending a further $5.0 million and completing a preliminary economic assessment.

Fortuna entered into an equity investment agreement with Prospero Silver Corp. (TSX.V: PSL) in early 2017 (see Prospero Silver news release dated April 17, 2017). This Strategic Alliance provides for the initial drilling of multiple targets at Prospero’s Matorral, Petate, Pachuca SE and Bermudez properties located in Durango, Hidalgo and Chihuahua States, respectively. High-level epithermal clay alteration with anomalous gold, silver or pathfinder elements are present at each property, none of which has been previously drilled.

The agreement gives Fortuna the right to select one of the projects to joint venture with Prospero, potentially earning a 70 % interest by spending $8 million over six years and completing a preliminary economic assessment on the selected property. Should Fortuna exercise its Prospero warrants, the right to select a second project under the same terms as above is retained. The exploration strategy is to complete the planned drilling at all targets, assess the data and select properties as dictated by the results.

Edwin A. Gutierrez, Technical Services Corporate Manager, is the Qualified Person for Fortuna Silver Mines Inc. as defined by National Instrument 43-101.  Mr. Gutierrez is a Registered Member of the Society for Mining, Metallurgy and Exploration, Inc. (SME Registered Member Number 4119110RM) and is responsible for ensuring that the information contained in this news release is an accurate summary of the original reports and data provided to or developed by Fortuna Silver Mines.

Forward looking Statements involve known and unknown risks, uncertainties and other factors which may cause the actual results, performance or achievements of the Company to be materially different from any results, performance or achievements expressed or implied by the Forward looking Statements. Such uncertainties and factors include, among others, whether the Company’s activities at the Lindero gold Project will proceed as planned; changes in general economic conditions and financial markets; changes in prices for silver and other metals; technological and operational hazards in Fortuna’s mining and mine development activities; risks inherent in mineral exploration; uncertainties inherent in the estimation of mineral reserves, mineral resources, and metal recoveries; governmental and other approvals; political unrest or instability in countries where Fortuna is active; labor relations issues; as well as those factors discussed under “Risk Factors” in the Company's Annual Information Form. Although the Company has attempted to identify important factors that could cause actual actions, events or results to differ materially from those described in Forward looking Statements, there may be other factors that cause actions, events or results to differ from those anticipated, estimated or intended.

Note: Total figures may not add up due to rounding