Jorge A. Ganoza, President and CEO, commented, “Our results in the fourth quarter of 2017 reflect record sales and EBITDA that have contributed to our strongest year to date in financial performance.” Mr. Ganoza continued, “Annual sales of $268.1 million, with EBITDA margins of 46% and strong cash accumulation from our mines attest to the strength of our assets and the positive momentum in our business. Drivers for year over year performance are higher precious metal production, higher base metal prices for our by-products, and improved commercial terms. ” Mr. Ganoza concluded, “Our Lindero gold project in Argentina is in the early stages of construction with on-site activities ramping up during the course of the second quarter”. 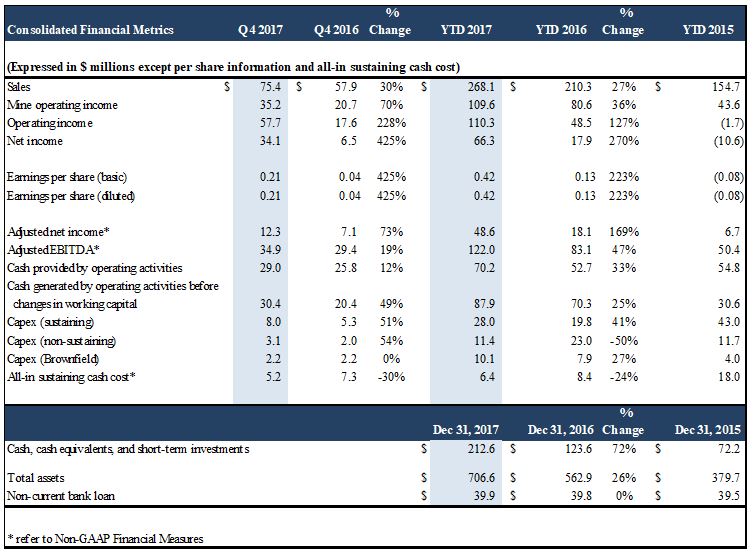 The increase in adjusted net income during the quarter was due primarily to higher sales across all of our products and was partially offset by higher selling, general and administrative expenses of $6.4 million, related mainly to the mark-to-market effects from share-based payments and higher production costs.  Additional items impacting the quarter were $1.5 million of realized losses from derivative contracts, $1.3 million in exploration and evaluation expenses, and partially offset by foreign exchange gains of $1.3 million.

Adjusted EBITDA was $34.9 million compared to $29.4 million in the comparable period in 2016 due to increased sales.

For the three months ended December 31, 2017, net cash provided by operating activities was $29.0 million or 12% higher than the $25.8 million in 2016 due primarily to higher adjusted EBITDA offset by changes in working capital items. 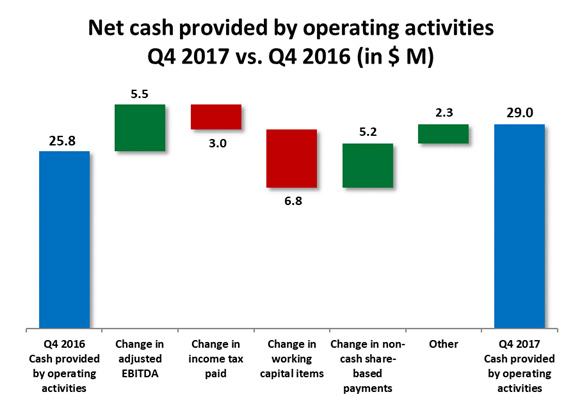 Adjusted net income for 2017 increased to $48.6 million from $18.1 million in 2016 mostly as a result of higher sales across all our products, reflecting the first full year of production at the expanded capacity of 3,000 tpd at the San Jose mine, strong by-product metal prices of lead and zinc, and significantly improved treatment and refining charges.

Also contributing to higher adjusted net income were lower selling, general and administrative expenses by $6.2 million related primarily to mark-to-market effect from share-based payments. Adjusted net income was negatively impacted by higher production cash costs, $2.0 million in foreign exchange losses from the strengthening of the Mexican Peso against the US dollar, and $1.6 million realized losses on derivative contracts. 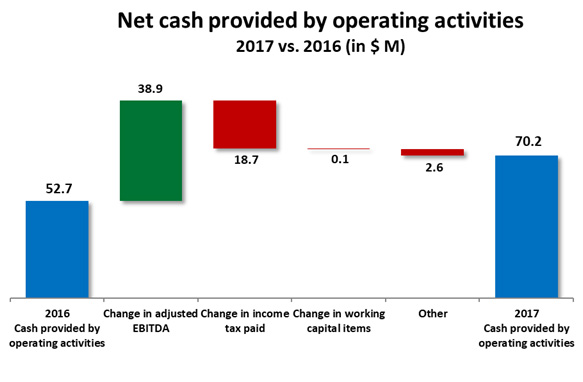 On January 26, 2018 the Company closed an amendment to its existing credit facility with Scotiabank to expand the facility from $40.0 million to $120.0 million. This takes our total sources of liquidity as at year end to over $290.0 million which along with the current rate of free cash flow by our existing operations, the Company expects to have sufficient liquidity to meet our funding needs during the construction of the Lindero project. 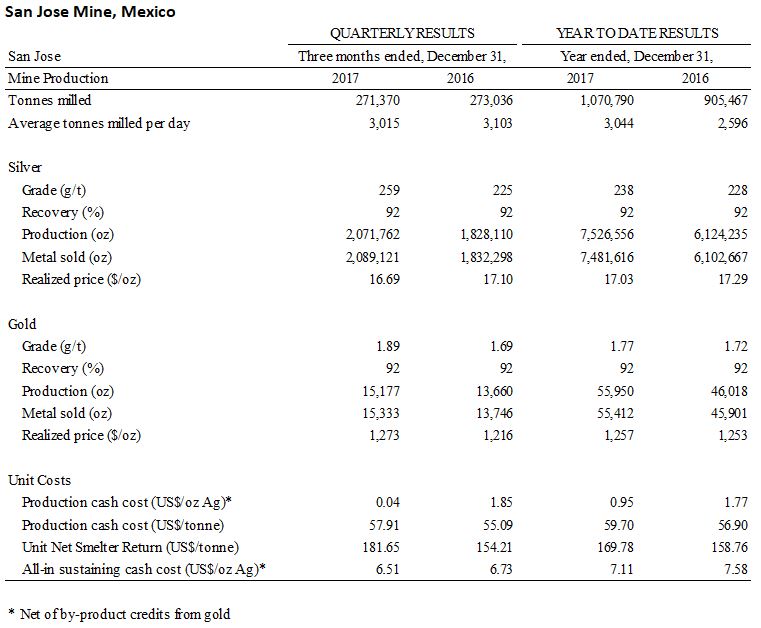 Silver and gold annual production for 2017 increased 23% and 22% above prior year’s production to 7,526,555 ounces and 55,950 ounces.  The increases were the result of 18% higher throughput as well as 4% and 3% higher head grades of gold and silver over the comparative period in 2016.  Silver and gold annual production were 6% and 8% above 2017 guidance, respectively.
Cash cost per tonne of processed ore for 2017 was $59.7, or 5% higher than the cost in the prior year.  Cash cost per tonne for 2017 was 5% above guidance due to higher mine support costs and local inflation on the cost of energy and materials.

All-in sustaining cash cost per payable ounce of silver, net of by-product credits, was $7.1 for 2017 and below the annual guidance of $8.4 as a result of higher gold price.

Cash cost per payable ounce of silver, and cash cost per tonne of processed ore, are non-GAAP financial measures. 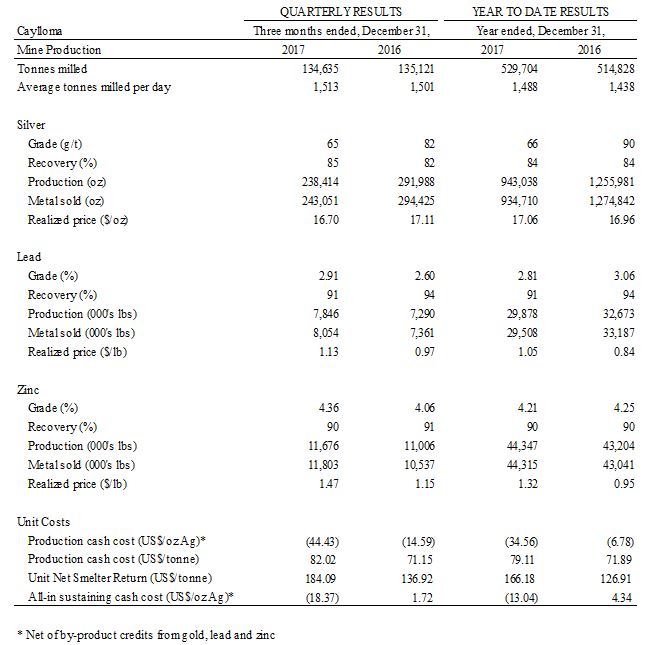 Cash cost per tonne of processed ore for the fourth quarter of 2017 was $82.0 which was 15% higher than the $71.2 cash cost for the comparable quarter of 2016. The increase was due primarily to higher energy, ground support, and labour costs.

Cash cost per payable ounce of silver, and cash cost per tonne of processed ore, are non-GAAP financial measures 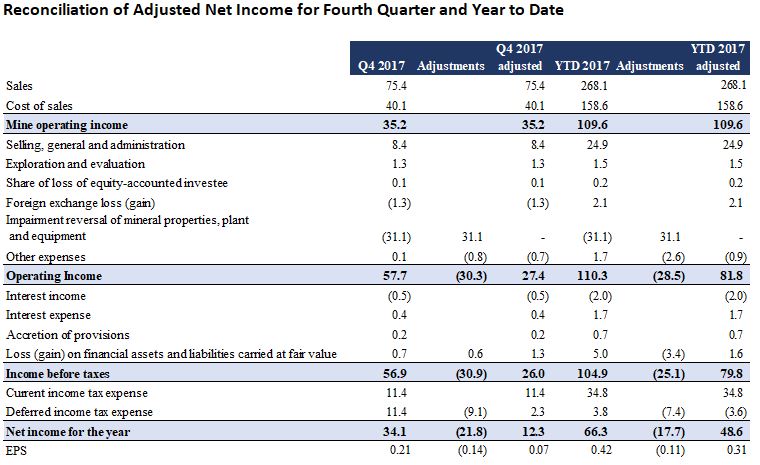 The financial statements and MD&A are available on SEDAR and have also been posted on the company's website at https://www.fortunasilver.com/investors/financials/2017/.

A conference call to discuss 2017 year-end financial and operational results will be held on Tuesday, March 20, 2018 at 9:00 a.m. Pacific | 12:00 p.m. Eastern.  Hosting the call will be Jorge A. Ganoza, President and CEO, and Luis D. Ganoza, Chief Financial Officer.

Shareholders, analysts, media and interested investors are invited to listen to the live conference call by logging onto the webcast at: https://www.webcaster4.com/Webcast/Page/1696/24991 or over the phone by dialing just prior to the starting time.