Jorge A. Ganoza, President, CEO and Director, commented, "We are pleased with our results for the first quarter which provide a good start to 2018 with all our key operating and financial indicators reflecting the strength of our assets." Mr. Ganoza added, "The Company achieved record silver and gold production along with industry leading margins and cash flow generation." Mr. Ganoza concluded, "Fortuna´s business strength and liquidity will provide the necessary flexibility to meet funding requirements for the development of the Lindero Project." 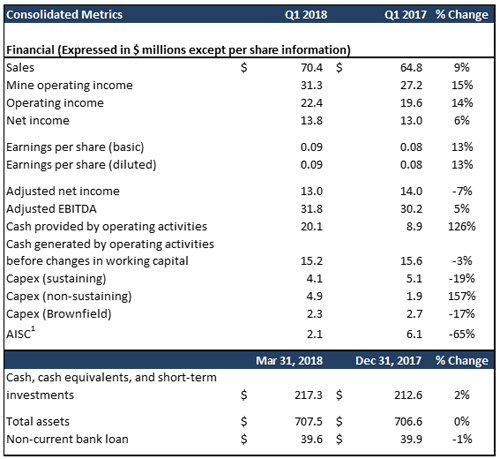 Net income for the three months ended March 31, 2018 was $13.8 million or $0.09 per share compared to $13.0 million or $0.08 per share for the comparable quarter in 2017. Higher sales of 9% over the comparable quarter resulted in turn in higher operating income of 14% which was partially offset at the net income level by a higher income tax expense. The effective tax rate for the first quarter 2018 was 38% compared to 26% for the same quarter in 2017. The low effective tax rate in 2017 was due to a high inflation rate and a strong Mexican Peso against the US dollar in Q1 2017 which have a positive impact on our Mexican operation, and lowered the income tax expense.

Adjusted net income was $13.0 million compared to $14.0 million in 2017, a decrease of $1.0 million after adjusting for unrealized gains on lead and zinc derivative contracts.

Silver and gold sold were 7% and 9% lower than actual metal produced reflecting higher concentrate inventory at the end of the first quarter associated with a change in our sales contract at the San Jose mine in the first quarter which involves a shift from local delivery of the concentrates to export of concentrate. This increased our concentrate inventory 618 tonnes with an estimated value of $4.1 million. The delay in the recognition of this sale would have contributed approximately $2.7 million to pre-tax earnings or $0.01 per share after tax.

As at March 31, 2018, the Company had cash and short-term investments of $217.3 million (December 31, 2017: $212.6 million). On January 26, 2018 the Company closed an amendment to its existing credit facility with Scotiabank to expand the facility from $40.0 million to $120.0 million. This takes our total sources of liquidity as at the end of the quarter to over $290.0 million which along with the current rate of free cash flow generated from our existing operations should provide sufficient liquidity to meet our funding needs during the construction of the Lindero project. 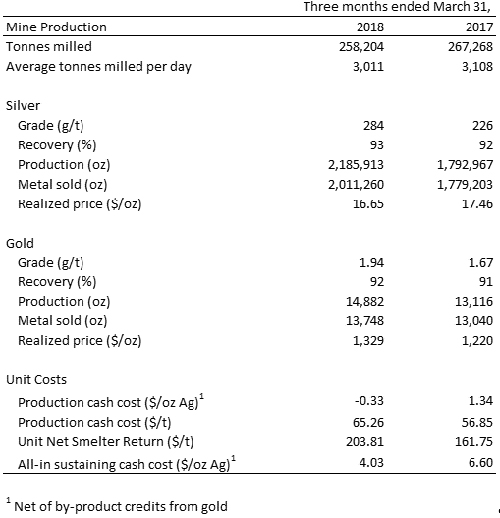 Cash cost per tonne of processed ore was $65.3, or 15% above the $56.9 cash cost for the comparable quarter in 2017 and 7% above annual guidance of $61.2. The higher cost compared to guidance was due to one-time items related to the operations of the dry stack tailings facility ($3.4/tonne), higher transportation costs due to increased shipments ($2.4/tonne) and faster execution of community relations program ($1.5/tonne). Cash cost per tonne for the remainder of the year is expected to be in line with guidance.

All-in sustaining cash cost per payable ounce of silver, net of by-product credits, was $4.0 for first quarter of 2018 and was below the annual guidance of $6.6 as a result of lower execution on sustaining capital and improvements in concentrate commercial terms. 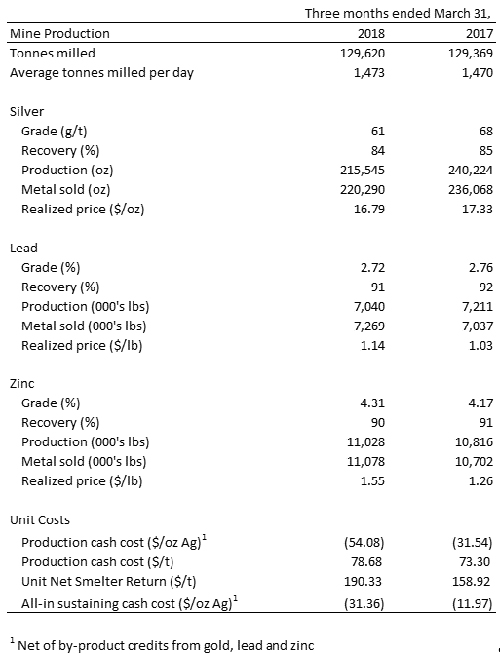 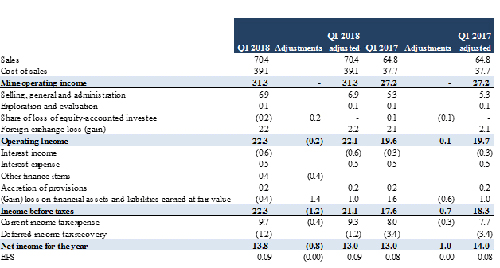 The financial statements and MD&A are available on SEDAR and have also been posted on the company's website at https://www.fortunasilver.com/investors/financials/2018/.

A conference call to discuss first quarter 2018 financial and operational results will be held on Thursday, May 10, 2018 at 9:00 a.m. Pacific | 12:00 p.m. Eastern. Hosting the call will be Jorge A. Ganoza, President and CEO, and Luis D. Ganoza, Chief Financial Officer.

Shareholders, analysts, media and interested investors are invited to listen to the live conference call by logging onto the webcast at: http://www.investorcalendar.com/IC/CEPage.asp?ID=176642 or over the phone by dialing just prior to the starting time.

Fortuna is a growth oriented, precious metal producer focused on mining opportunities in Latin America. The Company's primary assets are the Caylloma silver mine in southern Peru, the San Jose silver-gold mine in Mexico and the Lindero gold project in Argentina. The Company is selectively pursuing acquisition opportunities throughout the Americas and in select other areas.

Forward looking Statements involve known and unknown risks, uncertainties and other factors which may cause the actual results, performance or achievements of the Company to be materially different from any results, performance or achievements expressed or implied by the Forward Looking Statements. Such uncertainties and factors include, among others, changes in general economic conditions and financial markets; changes in prices for silver and other metals; technological and operational hazards in Fortuna's mining and mine development activities; risks inherent in mineral exploration; uncertainties inherent in the estimation of mineral reserves, mineral resources, and metal recoveries; governmental and other approvals; political unrest or instability in countries where Fortuna is active; labor relations issues; as well as those factors discussed under "Risk Factors" in the Company's Annual Information Form. Although the Company has attempted to identify important factors that could cause actual actions, events or results to differ materially from those described in Forward Looking Statements, there may be other factors that cause actions, events or results to differ from those anticipated, estimated or intended.

Forward looking Statements contained herein are based on the assumptions, beliefs, expectations and opinions of management, including but not limited to expectations regarding the Company's plans for its mines and mineral properties; mine production costs; expected trends in mineral prices and currency exchange rates; the accuracy of the Company's current mineral resource and reserve estimates; that the Company's activities will be in accordance with the Company's public statements and stated goals; that there will be no material adverse change affecting the Company or its properties; that all required approvals will be obtained; that there will be no significant disruptions affecting operations and such other assumptions as set out herein. Forward looking Statements are made as of the date hereof and the Company disclaims any obligation to update any Forward Looking Statements, whether as a result of new information, future events or results or otherwise, except as required by law. There can be no assurance that Forward Looking Statements will prove to be accurate, as actual results and future events could differ materially from those anticipated in such statements. Accordingly, investors should not place undue reliance on Forward Looking Statements.