Vancouver, February22, 2018--Fortuna Silver Mines, Inc. (NYSE: FSM) (TSX: FVI)is pleased to report updated Mineral Reserve and Mineral Resource estimates as of December 31, 2017 for the Caylloma Mine located in Peru, the San Jose Mine located in Mexico and the Lindero Project in  Argentina.

Jorge A. Ganoza, President and CEO, commented: “Our infill drill programs at San Jose and Caylloma mines were successful at replenishing reserves mined in 2017.” Mr. Ganoza continued, “In addition, the exploration programs over the last year at Caylloma have yielded a 92 percent increase in tonnes of Inferred Resources. This success underpins the potential for this mine to continue presenting opportunities to extend its life.”

Highlights of Reserve and Resource Update 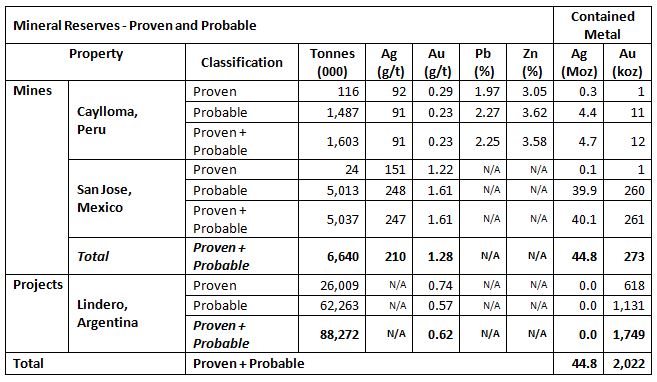 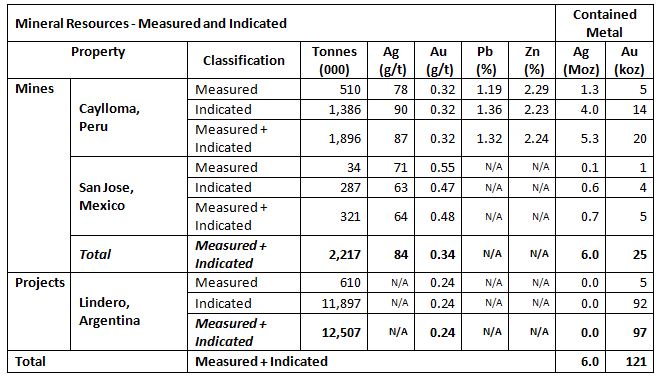 Year-over-year, Mineral Reserves remained unchanged in terms of tonnes and contained silver, while contained gold decreased by 6 percent after net changes resulting from production-related depletion and the upgrading and conversion of Inferred Resources to Mineral Reserves due to a successful infill drill program focused primarily on the Stockwork zones adding 0.7 Mt of new reserves averaging 286 g/t Ag and 1.44 g/t Au. Silver grade decreased 1 percent to 247 g/t and gold grade decreased 6 percent to 1.61 g/t.

Measured and Indicated Resources exclusive of Mineral Reserves decreased year-over-year from 0.8 Mt to 0.3 Mt due to a decrease in operating costs and better commercial terms resulting in the breakeven cut-off grade for reserves decreasing from 127 g/t to 117 g/t Ag Eq.

Brownfields exploration program budget for 2018 at the San Jose Mine is US$8.4 million, which includes 45,500 meters of diamond drilling and 340 meters of underground development for drilling access and platforms. Exploration drilling will focus on the Trinidad Central and Trinidad North zones and on the sub-parallel Victoria vein.

An infill drilling program of 6,485 meters for the upgrading of Inferred Resources into Measured or Indicated Resources is underway at the San Jose Mine. The budget of the infill drill program for 2018 is US$0.84 million.

Inferred Resources increased by 2.7 Mt or 92 percent year-over-year. Silver grade decreased by 17 percent, whereas lead and zinc grades increased 69 percent and 37 percent, respectively. The increase in Inferred Resources is primarily due to a successful Brownfields exploration drill program of the Animas NE vein that discovered 2.5 Mt of new resources averaging 81 g/t Ag, 3.82% Pb, and 5.42% Zn.

Brownfields exploration program budget for 2018 at the Caylloma Mine is US$2.2 million, which includes 10,250 meters of diamond drilling. Drilling will focus on a previously unexplored area between ore shoots on the Animas NE vein that were discovered in 2017 (see Fortuna news release dated October 11, 2017).

An infill drilling program of 6,150 meters for the upgrading of Inferred Resources into Measured or Indicated Resources is being presently conducted at the Caylloma Mine. The budget of the infill drill program for 2018 is US$0.71 million.

Year-over-year, Mineral Reserve tonnes increased 7 percent while gold grade decreased 2 percent to 0.62 g/t. Changes are primarily due to increases in the expected metallurgical recoveries based on updated testwork conducted in 2017, adjustments in projected processing and refining costs, and the conversion of Inferred Resources to Mineral Reserves due to the metallurgical infill drill program conducted in late 2016.

Measured and Indicated Resources exclusive of Mineral Reserves decreased year-over-year from 34.8 Mt to 12.5 Mt due to the application of updated metallurgical recoveries and the optimization of the ultimate pit shell.

Year-over-year, Inferred Resources decreased 88 percent in tonnes and 89 percent in contained gold ounces. The net variation is primarily due to the optimization of the ultimate pit shell to schedule only material defined as Mineral Reserves, resulting in the exclusion of 34.2 Mt or 0.47 Moz of Inferred Resources located at the periphery of the updated pit design. In addition, 6.6 Mt or 0.07 Moz of Inferred Resources was upgraded to Mineral Reserves as a consequence of the metallurgical infill drill program and adjustments in the geological interpretation.

The 2018 Brownfields exploration budget at Lindero is US$321,000 which includes investigating the economic potential of including the Arizaro gold-copper porphyry target that lies within the concession block into the existing Lindero resource through additional surface mapping and 2,000 meters of core drilling targeting shallow, high-grade copper-gold mineralization.

An infill drilling program of 2,000 meters is to be conducted at the Lindero Project in the second quarter of 2018 to improve the grade estimates of material planned for mining in Year 1 and collect additional metallurgical samples for testwork in the second half of 2018. The budget of the infill drill program for 2018 is US$460,000.

E. Chapman and E. Gutierrez are Qualified Persons as defined by the National Instrument 43-101.  Mr. Chapman is a Professional Geoscientist of the Association of Professional Engineers and Geoscientists of the Province of British Columbia (Registration Number 36328) and is responsible for ensuring that the information contained in this news release is an accurate summary of the original reports and data provided to or developed by Fortuna Silver Mines.

Forward looking Statements involve known and unknown risks, uncertainties and other factors which may cause the actual results, performance or achievements of the Company to be materially different from any results, performance or achievements expressed or implied by the Forward looking Statements. Such uncertainties and factors include, among others, whether the Company’s activities at its properties will proceed as planned; changes in general economic conditions and financial markets; changes in prices for silver and other metals; technological and operational hazards in Fortuna’s mining and mine development activities; risks inherent in mineral exploration; uncertainties inherent in the estimation of mineral reserves, mineral resources, and metal recoveries; governmental and other approvals; political unrest or instability in countries where Fortuna is active; labor relations issues; as well as those factors discussed under “Risk Factors” in the Company's Annual Information Form. Although the Company has attempted to identify important factors that could cause actual actions, events or results to differ materially from those described in Forward looking Statements, there may be other factors that cause actions, events or results to differ from those anticipated, estimated or intended.

Reserve and resource estimates included in this news release have been prepared in accordance with National Instrument 43-101 Standards of Disclosure for Mineral Projects ("NI 43-101") and the Canadian Institute of Mining, Metallurgy, and Petroleum Definition Standards on Mineral Resources and Mineral Reserves. NI 43-101 is a rule developed by the Canadian Securities Administrators that establishes standards for public disclosure by a Canadian company of scientific and technical information concerning mineral projects. Canadian standards, including NI 43-101, differ significantly from the requirements of the United States Securities and Exchange Commission ("SEC"), and reserve and resource information contained in this news release may not be comparable to similar information disclosed by U.S. companies. In particular, the term "resource" does not equate to the term "reserves". Under U.S. standards, mineralization may not be classified as a "reserve" unless the determination has been made that the mineralization could be economically and legally produced or extracted at the time the reserve determination is made.