Jorge A. Ganoza, President and CEO, commented, "Production and cash costs at our Caylloma and San Jose mines for the first quarter underpin a solid start for the year with EBITDA margins of 40 percent. Our cash flow generation objectives remain on track to continue contributing to the funding of our Lindero gold project in Argentina."  Mr. Ganoza continued, "As of the end of April, Lindero construction progress is at 47 percent completion, with 97 percent of the direct capital expenditures committed, and 61 percent of the total projected capital spent." Mr. Ganoza added, "With mine preparation set to be concluded in May and construction of the crushing and leach pad facilities advancing according to schedule, we plan to initiate placing ore on the leach pad early in Q4 2019." 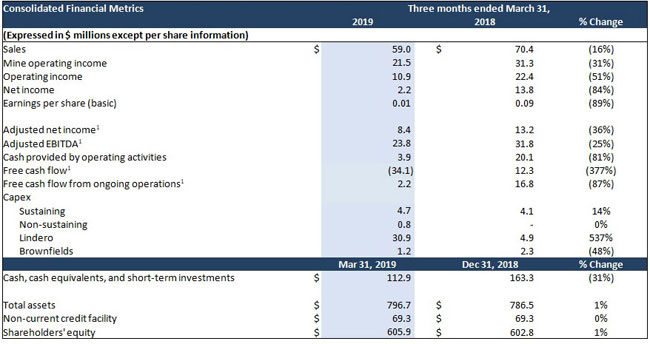 Sales for the three months ended March 31, 2019 were $59.0 million, a 16% decrease from the $70.4 million reported in Q1 2018. The decrease in sales was due primarily to a decline in metal prices for silver, lead, and zinc of 7%, 19%, and 21%, respectively, and to lower sales volume in silver and gold of 7% and 11%. Contributing to lower sales volume was a $3.7 million accumulation of concentrate inventory during the quarter.

Adjusted net income for the quarter was $8.4 million compared to $13.2 million reported in the same quarter of 2018.  The decrease in adjusted net income was due mainly to lower sales at both San Jose and Caylloma, and was partially offset by realized gains on commodity derivative contracts.

Adjusted EBITDA for the period was $23.8 million compared to $31.8 million in the comparable period in 2018. The decrease in adjusted EBITDA was due primarily to lower sales volume and lower realized metal prices.

Net cash provided by operating activities for the three months ended March 31, 2019 was $3.9 million compared to $20.1 million reported in 2018 due to lower sales as well as negative changes in working capital of $9.2 million in 2019 compared to positive changes of $5.2 million in 2018.  Free cash flow from ongoing operations was $2.2 million, which was negatively impacted by changes in working capital during the quarter.

At March 31, 2019, the Company had cash, cash equivalents, and short-term investments of $112.9 million (December 31, 2018 – $163.3 million). The decrease in cash reflects the increase in the pace of spending at the construction of the Lindero project. Total liquidity available to the Company as of March 31, 2019 was $192.9 million, which includes $80.0 million of available credit under a $150 million credit facility.

Construction at the Lindero open pit heap leach gold mine located in Salta Province Argentina is at 47% completion.  Approximately 97% of direct capital costs have been committed. Construction spending for the first quarter of 2019 totaled $42.2 million comprising of $30.9 million on construction expenditures, and $11.3 million on deposits for equipment and advances to contractors. Total construction spending as at the end of March 31, 2019 was $165 million. 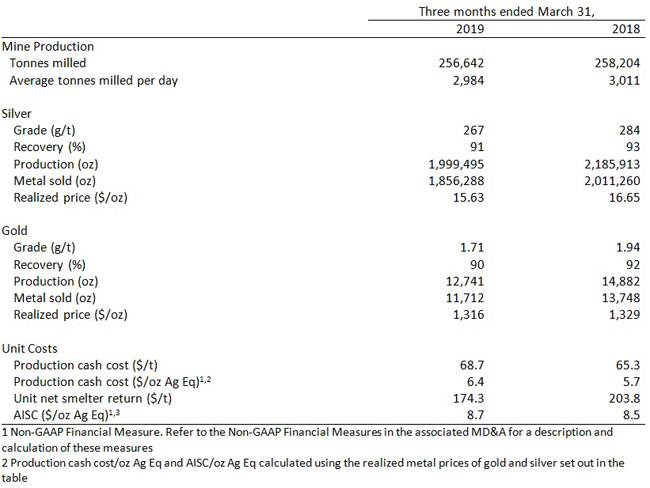 Cash cost per tonne of processed ore increased 5% to $68.7 per tonne compared to $65.3 per tonne for the comparable quarter in 2018 and was in-line with guidance. The increase was due to higher mining costs related to preparation and backfill, and was partially offset by lower dry-stack tailings operating costs. 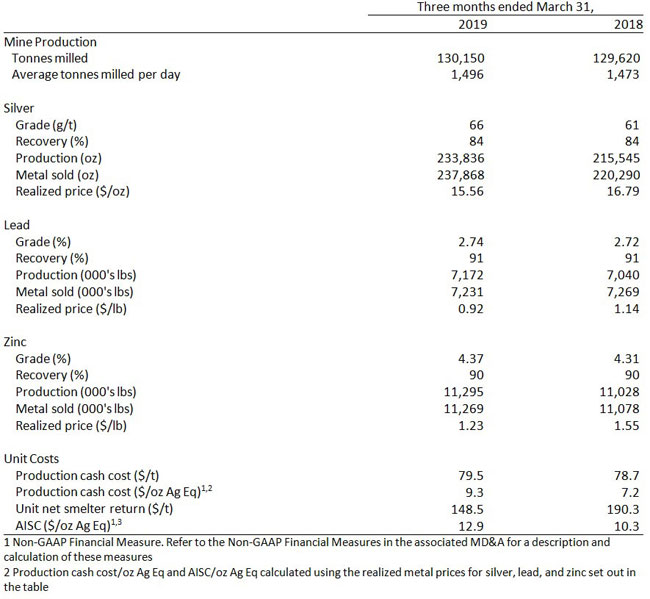 The Caylloma Mine produced 7.2 million pounds of lead and 11.3 million pounds of zinc, which were both 2% higher than the production for the comparable quarter in 2018. The increased production was due to higher head grades of lead and zinc of 2.74% and 4.37%, respectively, as well as slightly higher mill throughput. Silver production totaled 233,836 ounces, which was 8% higher than the comparable quarter in 2018.

The following tables represent the computation of certain Non-GAAP Financial Measures as referenced in this news release. 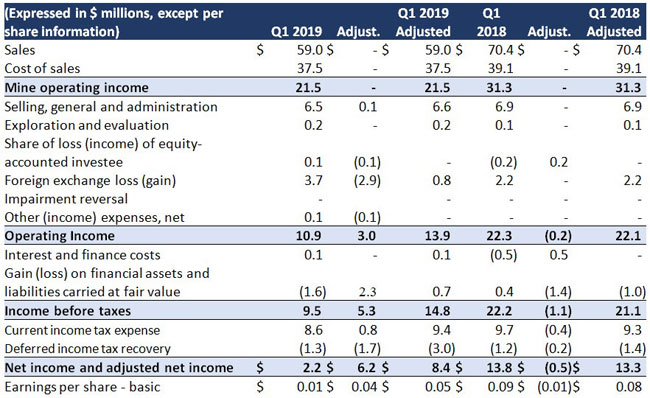 Certain figures may not add due to rounding

The financial statements and MD&A are available on SEDAR and have also been posted on the company's website at https://www.fortunasilver.com/investors/financials/2019/.

A conference call to discuss the financial and operational results will be held on Wednesday, May 15, 2019 at 9:00 a.m. Pacific | 12:00 p.m. Eastern. Hosting the call will be Jorge A. Ganoza, President and CEO, and Luis D. Ganoza, Chief Financial Officer.

Shareholders, analysts, media and interested investors are invited to listen to the live conference call by logging onto the webcast at: https://www.webcaster4.com/Webcast/Page/1696/30434 or over the phone by dialing just prior to the starting time.