Jorge A. Ganoza, President and CEO, commented, “On the strength of our two operating mines and improved metal prices, we generated adjusted EBITDA of $19.2 million with strong free cash flow from ongoing operations of $10.6 million in the third quarter of 2019. These financial metrics are in spite of a challenging quarter from an operating perspective as our mine sequencing at San Jose yielded lower grades and we experienced a peak in our quarterly cash cost for the year. Both our production and costs are expected to be aligned with our plan in Q4 and we confirm our full-year production and cost guidance.” Mr. Ganoza continued, “In Argentina, the lower Peso created an unrealized foreign exchange loss of $8.3 million relating to our VAT construction receivable. This was a key factor in our net loss of $7.7 million for the quarter.” Mr. Ganoza further indicated, “As of the end of October, Lindero overall construction is 81 percent complete, with 99 percent of direct capital expenditures committed, and over 85 percent of the total projected construction capital spent.” Mr. Ganoza concluded, “Pre-production mining at Lindero commenced in early September and placing of ore on the leach pad is scheduled to commence in December 2019.”

1. Refer to Non-GAAP Financial Measures and Forward-Looking Statements at the end of this news release

Overview of financial and operating results

The Company’s financial results for the quarter were impacted by an $8.3 million foreign exchange loss related to the VAT construction receivable in Argentina resulting in a net loss of $7.7 million. After adjusting for non-cash and non-recurring items, the adjusted net income for the quarter was $1.9 million compared to $9.6 million in Q3 2018 and $7.2 million in Q2 2019. The lower adjusted net income in the context of higher precious metal prices was mostly as a result of lower silver and gold metal production of 13% and 9%, respectively, compared to Q3 2018 that prevented us from realizing the full benefit of rising metal prices in the quarter. The lower metal output was related to mine production sequencing at the San Jose Mine in the quarter. Management expects production in the fourth quarter to be aligned with the mine plan and management continues to confirm production guidance for the year.

Total liquidity available to the Company as of September 30, 2019 was $112.2 million, which includes $40.0 million of available credit under our $150.0 million credit facility. At the end of the quarter, the Company had cash, cash equivalents, and short-term investments of $72.2 million (December 31, 2018 – $163.3 million), a decrease of $91.1 million since the beginning of the year. The decrease reflects the increased spending on construction of the Lindero project.

Subsequent to the end of the quarter, the Company closed a bought deal public offering of senior subordinated, unsecured convertible debentures which raised aggregate gross proceeds of $46 million. 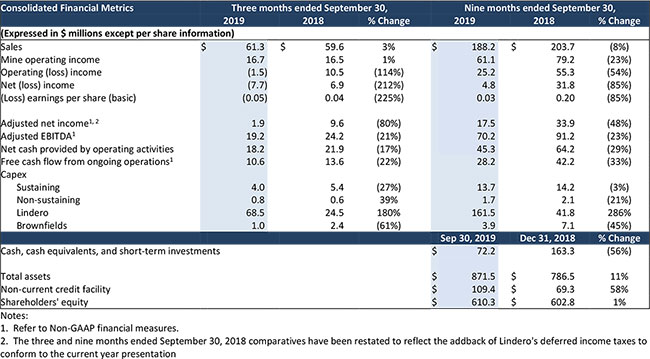 Sales for the quarter were $61.3 million, a 3% increase from the $59.6 million reported in the same quarter in 2018. The increase in sales was due primarily to higher metal prices for silver and gold of 17% and 23%, respectively, but was partially offset by a decrease in the volume of silver and gold ounces sold of 10% and 6% respectively, as well as a 10% decrease in the volume of lead sold and lower zinc prices of 8%.

The operating lossfor the quarter was $1.5 million, compared to operating income of $10.5 million in the same quarter in 2018. The loss was due to an $8.3 million foreign exchange loss on the value added tax receivable at our Lindero project in Argentina. Other items impacting the quarter were $1.3 million in non-cash impairment charges related to our exploration initiatives.

Excluding the foreign exchange loss in Argentina and the non-cash impairment charges, on an adjusted basis, operating income was $8.1 million, compared to $12.0 million in Q3 2018. The decrease was mainly due to higher share-based payments expense of $1.9 million ($1.5 million in Q3 2019 compared to $0.4 million credit in Q3 2018), higher production costs of $1.8 million, and higher spending in exploration and evaluation activities of $1.3 million.

Adjusted EBITDA for the period was $19.2 million compared to $24.2 million in the comparable period in 2018. The decrease in adjusted EBITDA was due primarily to higher share-based payments, higher operating costs and higher spending in exploration and evaluation activities. 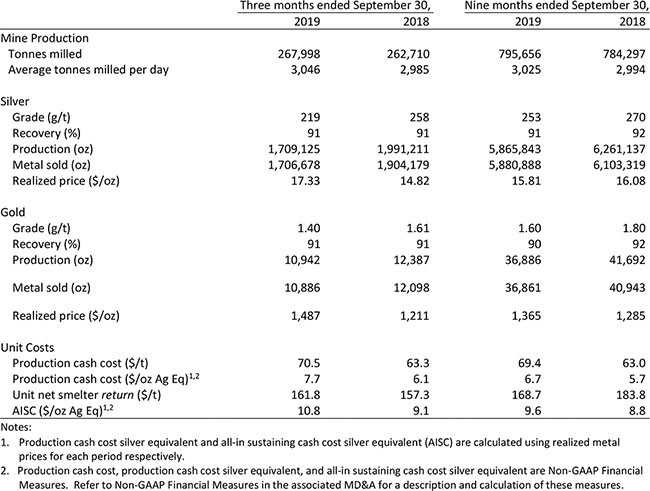 The San Jose Mine produced 1,709,125 ounces of silver and 10,942 ounces of gold in the third quarter of 2019, which were 14% and 12% below the comparable quarter in 2018. The lower metal output was related to mine production sequencing in the quarter. The Company expects silver and gold production to be in accordance with the mine plan in the fourth quarter and annual production will be within the 2019 annual production guidance.

Cash cost per tonne of processed ore for the third quarter ended September 30, 2019 increased 11% to $70.5 per tonne compared to $63.3 per tonne for the comparable quarter in 2018. The increased cash cost was due to higher contractor costs and mine support costs and was partially offset by lower dry-stack tailings operating and energy costs. The cash cost for the quarter was slightly above the annual cost guidance. The fourth quarter and annual cash cost are expected to be within the annual cash cost guidance. 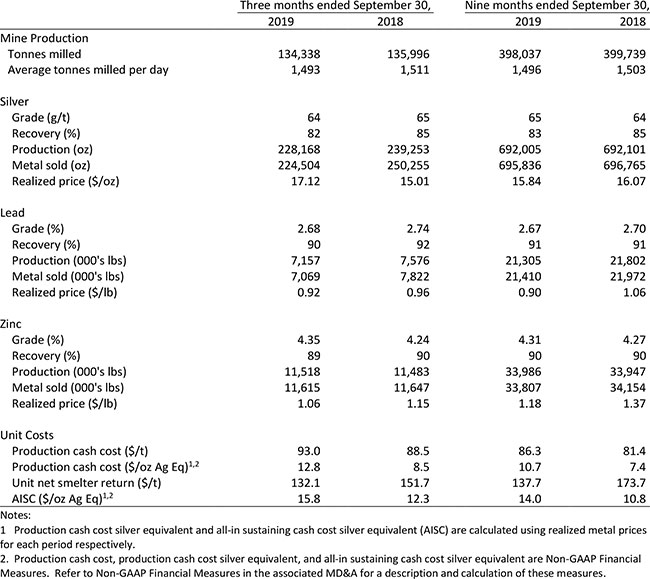 Cash cost per tonne of processed ore was $93.0 which was 5% higher than the $88.5 cash cost per tonne for the comparable quarter in 2018 and 5% higher than the high end of our annual guidance range. The higher cash cost was due primarily to higher indirect costs related mainly to on-site camp maintenance and personnel transportation, higher mine support costs, timing of maintenance of the processing plant, and higher zinc concentrate transportation costs as a result of road blockades unrelated to Caylloma’s operations that took place during the quarter. Cash cost for the fourth quarter is expected to be at the high end of the annual guidance range while annual cash cost is expected to be within guidance. 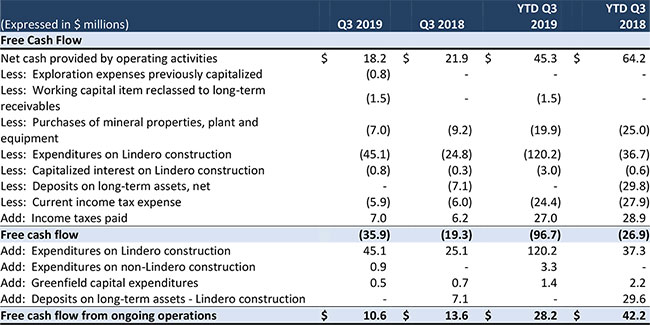 The financial statements and MD&A are available on SEDAR and on the Company's website at https://www.fortunasilver.com/investors/financials/2019/.

A conference call to discuss the financial and operational results will be held on Monday, November 18, 2019 at 9:00 a.m. Pacific time | 12:00 p.m. Eastern time. Hosting the call will be Jorge A. Ganoza, President and CEO, and Luis D. Ganoza, Chief Financial Officer.

Shareholders, analysts, media and interested investors are invited to listen to the live conference call by logging onto the webcast at: https://www.investornetwork.com/event/presentation/56572 or over the phone by dialing just prior to the starting time.

Forward looking Statements involve known and unknown risks, uncertainties and other factors which may cause the actual results, performance or achievements of the Company to be materially different from any results, performance or achievements expressed or implied by the Forward looking Statements. Such uncertainties and factors include, among others, changes in general economic conditions and financial markets; changes in prices for silver and other metals; fluctuation in foreign exchange rates; any extension of the currency controls in Argentina; technological and operational hazards in Fortuna's mining and mine development activities; delays in the construction at the Lindero Project, delays in the commissioning or commencement of commercial production at the Lindero Project; risks inherent in mineral exploration; uncertainties inherent in the estimation of mineral reserves, mineral resources, and metal recoveries; governmental and other approvals; political unrest or instability in countries where Fortuna is active; labor relations issues; as well as those factors discussed under "Risk Factors" in the Company's Annual Information Form. Although the Company has attempted to identify important factors that could cause actual actions, events or results to differ materially from those described in Forward looking Statements, there may be other factors that cause actions, events or results to differ from those anticipated, estimated or intended.