Jorge A. Ganoza, President and CEO, commented, “Based on the results of the 2018 infill drill program and optimization of our mine plan, we have been able to identify higher grade mineralized areas for mining in Lindero´s first year of commercial production.” Mr. Ganoza added, “As we conduct additional studies on expanding the leach pad facility, the Company will be in a position to assess the ability to upgrade material from measured and indicated resources to reserves.”

Mineral Resource estimation involved the usage of drill hole samples in conjunction with surface mapping to construct three-dimensional wireframes defining lithologic, alteration, and grade domains. Samples were selected inside these wireframes, coded, composited and top cut. Boundaries were treated as hard, firm or soft based on statistical and geostatistical analysis. Gold and copper grades were estimated by ordinary kriging into a geological block model consisting of 10 meter x 10 meter x 4 meter selective mining units representing each domain. Estimated grades were validated globally, locally, and visually prior to classification and are reported above a 0.20 g/t Au cut-off grade within a conceptual pit shell.

The updated Mineral Resource and Mineral Reserve estimates use the same methodology (key assumptions, parameters and methods) as the Technical Report which is available on the Company’s website, on SEDAR, and on the SEC’s website. However, Mineral Reserve estimates have been conducted taking into account the new updated resource block model, revised cost estimates, metal prices, projected exchange rates, and the updated detailed design capacity of the leach pad. Mineralized material inside the ultimate pit shell that cannot be accommodated by the updated leach pad design has been classified as a Mineral Resource. 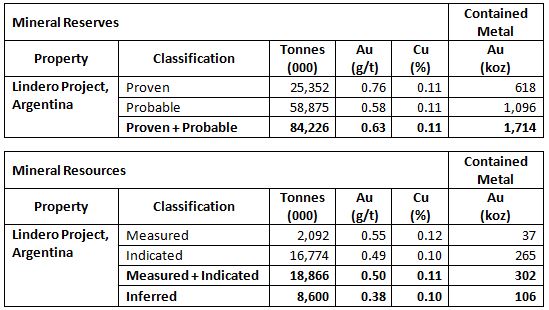 For the first year of commercial production, Lindero´s mine plan has been optimized so that the operation will benefit from mining the higher grade mineralization outcropping that was identified through the infill drilling completed in 2018. As a result, gold doré production for Lindero’s first year of commercial production is estimated to be between 145,000 ounces and 160,000 ounces and is based on the factors set out in the Technical Report.

Eric Chapman, Vice President of Technical Services, is a Professional Geoscientist of the Association of Professional Engineers and Geoscientists of the Province of British Columbia (Registration Number 36328) and has reviewed and approved the scientific and technical information contained in this news release.

Forward looking Statements involve known and unknown risks, uncertainties and other factors which may cause the actual results, performance or achievements of the Company to be materially different from any results, performance or achievements expressed or implied by the Forward looking Statements. Such uncertainties and factors include, among others, whether the Company’s activities at its properties will proceed as planned; delays in construction at the Lindero Project; delays in commissioning of the mine at Lindero; delays in the commencement of commercial production; changes in general economic conditions and financial markets; changes in prices for silver, gold and other metals; technological and operational hazards in Fortuna’s mining and mine development activities; risks inherent in mineral exploration; uncertainties inherent in the estimation of mineral reserves, mineral resources, and metal recoveries; governmental and other approvals; political unrest or instability in countries where Fortuna is active; labor relations issues; as well as those factors discussed under “Risk Factors” in the Company's Annual Information Form. Although the Company has attempted to identify important factors that could cause actual actions, events or results to differ materially from those described in Forward looking Statements, there may be other factors that cause actions, events or results to differ from those anticipated, estimated or intended.

Forward looking Statements contained herein are based on the assumptions, beliefs, expectations and opinions of management, including but not limited to: that the Company’s activities at its properties will proceed as planned; expectations regarding mine production costs; doré production guidance for the first year of  commercial production is based on certain estimates and assumptions, including but not limited to: construction at the Lindero Project continues according to current time and cost scheduling, Mineral Resources and Mineral Reserves, geological formations, grade and continuity of deposits and metallurgical characteristics; expected trends in mineral prices and currency exchange rates; the accuracy of the Company’s current mineral resource and reserve estimates; that the Company’s activities will be in accordance with the Company’s public statements and stated goals; that there will be no material adverse change affecting the Company or its properties; that all required approvals will be obtained; that there will be no significant disruptions affecting operations and such other assumptions as set out herein. Forward looking Statements are made as of the date hereof and the Company disclaims any obligation to update any Forward looking Statements, whether as a result of new information, future events or results or otherwise, except as required by law. There can be no assurance that Forward looking Statements will prove to be accurate, as actual results and future events could differ materially from those anticipated in such statements. Accordingly, investors should not place undue reliance on Forward looking Statements.