Jorge A. Ganoza, President and CEO, commented, “Our results in the quarter were marked by lower production at the San Jose Mine, negative metal price adjustments at the end of March, and an unusually high income tax provision related to the devaluation of the Mexican peso.  These factors compounded to reflect an adjusted net loss of $2.2 million.  However, free cash flow from ongoing operations remained strong at $14.2 million.”  Mr. Ganoza continued, “In the month of May, we look forward to a gradual resumption of operations at San Jose and the re-commencement of construction at Lindero.”  Mr. Ganoza added, “We have developed plans for, and are prepared to operate in the new COVID-19 business environment.  Measures include aggressive opex and capex reductions of $23 million for 2020.”  Mr. Ganoza concluded, “The recently announced financing will provide the Company with the necessary financial flexibility to bring our Lindero gold mine into production at a time of unprecedented uncertainty.”

In response to the COVID-19 pandemic, the Company has developed plans to adjust its operations to the new sanitary protocols that allow business continuity under local regulations.  Descriptions of the plans for each of the Company’s mines are provided in the March 31, 2020 MD&A.  As part of these response plans, the Company has implemented opex and capex reductions for 2020 at Corporate and its operating mines for a total of approximately $23 million. These reductions include $2.5 million in corporate executive compensation, $12.2 million of capex, and $7.3 million of opex and expenses.  The Company will continue to monitor the evolving business environment to assess the effectiveness of its COVID-19 plans and budget reductions.

Sales for the three months ended March 31, 2020 were $47.5 million, a $11.5 million decrease from the $59.0 million reported in the first quarter of 2019.  The decrease was due primarily to lower silver and gold sales volume at the San Jose Mine, lower lead and zinc prices compared to the same period in 2019, and negative metal price adjustments at the end of March 2020.

Foreign exchange loss in the quarter was $1.3 million, which includes a $3.2 million loss related to the Lindero Project in Argentina and partially offset by a $2.0 million foreign exchange gain on the devaluation of the Mexican Peso.  The Company also recognized $1.1 million of Argentine pesos denominated investment gains from cross border trades.   Excluding the foreign exchange loss in Argentina and the investment gains, on an adjusted basis, income before income taxes was $4.9 million compared to $14.8 million in the first quarter of 2019.

Adjusted EBITDA for the three months ended March 31, 2020 was $15.9 million compared to $23.8 million for the same period of 2019, as a result of the same factors that impacted operating income.

On May 11, 2020, the Company announced that it had entered into an agreement with a syndicate of Underwriters, who have agreed to purchase on a “bought deal” basis an aggregate of 20,000,000 common shares of the Company at a price of $3.00 per share, for aggregate gross proceeds of $60 million (the “Offering”).  The Company has also granted the Underwriters an over-allotment option to purchase up to an additional 3,000,000 common shares, representing 15% of the number of shares sold under this Offering.

Construction at the Lindero open pit heap leach gold mine located in Salta Province, Argentina is approximately 94% complete as at March 31, 2020.

The Company reiterates a construction capex forecast of between $314 to $320 million.

As of March 31, 2020, the Company estimates the remaining funds required to complete the Project, inclusive of pre-production expenditures, working capital and value added tax payments to be in the range of $75 to $80 million up to the commencement of commercial production in the first quarter of 2021. 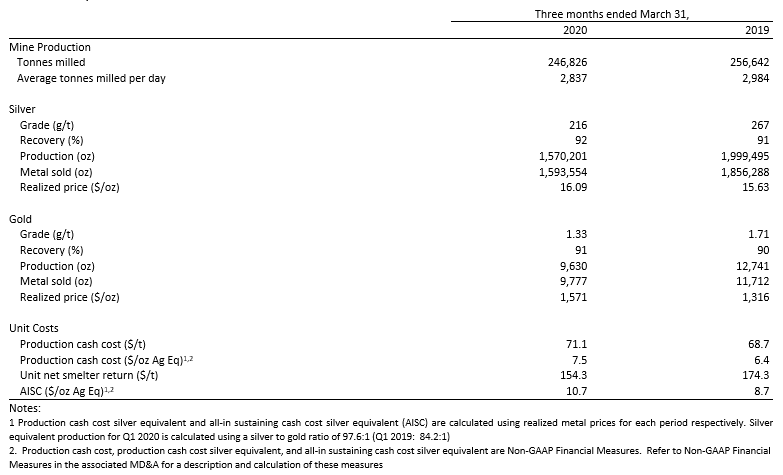 The San Jose Mine produced 1,570,201 ounces of silver and 9,630 ounces of gold in the first quarter of 2020, which were 21% and 24% lower than the comparable quarter in 2019.  Lower silver and gold production were attributed to lower head grades and a decrease in tonnes of ore processed.  The lower head grades were due to a planned modification to the mining sequence to allow preparation work to be conducted for pillar recovery. This restricted access to high-grade materials and resulted in mining more variable peripheral stopes.  The decrease in ore processed was due to a stoppage in mining and processing operations caused by illegal road blockades in the vicinity of the mine, including access to the mine. The decrease in metal production is expected to be recovered throughout the remainder of the year, once government-imposed restrictions on the Mexican mining industry are lifted and production at the mine recommences.

Cash cost per tonne of processed ore increased 4% to $71.12 per tonne compared to $68.66 per tonne for the comparable quarter in 2019.  The increased cash cost was due to higher transportation costs and partially offset by lower community support costs.

On March 31, 2020, the Government of Mexico announced extraordinary measures in response to the spread of COVID-19, which includes the suspension of all non-essential activities, including mining, until April 30, 2020.  As a result, the Company initiated the orderly temporary suspension of mining and processing activities at the San Jose Mine. A reduced task force remains on site to safeguard critical infrastructure and maintain environmental monitoring through the suspension period.  On April 21, 2020, the Mexican Government further extended the suspension of all non-essential activities, including mining from April 30, 2020 to May 30, 2020; however, the Mexican authorities have announced that these restrictions may be lifted on May 18, 2020 in municipalities where COVID-19 numbers are low or there are no reported cases of infection. 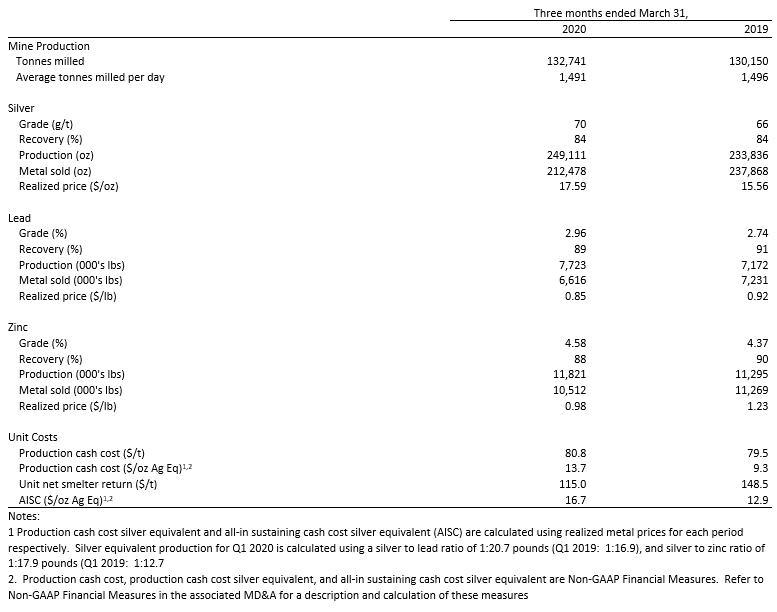 The Caylloma Mine produced 7.7 million pounds of lead and 11.8 million pounds of zinc for the first quarter of 2020, which were 8% and 5% higher than the comparable quarter in 2019.  The higher production was due primarily to an 8% and 5% higher lead and zinc head grade and a 2% increase in processed ore.  Silver production totaled 249,111 ounces or 7% higher than the comparable quarter in 2019 which was attributed to a 6% increase in head grade and, to a lesser extent, a 2% increase in processed ore.

On March 15, 2020, the Government of Peru introduced a series of measures to contain the rapid spread of COVID-19. The Company, in compliance with the regulatory framework issued by the Ministerio de Energía y Minas (“MEM”) and the Ministerio del Interior (“MI”), proceeded to demobilize non-critical personnel and continued to operate, using essential personnel at Caylloma, by drawing ore from its coarse ore stockpiles . In the first quarter of 2020, 86 percent of the treated ore was sourced from the Animas vein grading 70 g/t Ag, 2.95% Pb and 4.57% Zn and 14 percent was sourced from coarse ore stockpiles grading 71 g/t Ag, 2.91% Pb and 4.65% Zn.  On May 2, 2020, mining resumed with a reduced workforce in accordance with the regulatory framework issued by MEM.

Reconciliation to Adjusted Net Income (loss) for the three months ended March 31, 2020 and 2019

Reconciliation to Adjusted EBITDA for the three months ended March 31, 2020 and 2019

Reconciliation to Free cash flow from ongoing operations for the three months ended March 31, 2020 and 2019

The financial statements and MD&A are available on SEDAR and on the Company's website:
https://www.fortunasilver.com/investors/financials/2020/.

A conference call to discuss the financial and operational results for the first quarter of 2020 will be held on Friday, May 15, 2020 at 9:00 a.m. Pacific time | 12:00 p.m. Eastern time. Hosting the call will be Jorge A. Ganoza, President and CEO, and Luis D. Ganoza, Chief Financial Officer.

Shareholders, analysts, media and interested investors are invited to listen to the live conference call by logging onto the webcast at: https://www.webcaster4.com/Webcast/Page/1696/34468 or over the phone by dialing in just prior to the starting time.

Forward looking Statements involve known and unknown risks, uncertainties and other factors which may cause the actual results, performance or achievements of the Company to be materially different from any results, performance or achievements expressed or implied by the Forward looking Statements. Such uncertainties and factors include, among others, changes in general economic conditions and financial markets; changes in prices for silver and other metals; fluctuation in foreign exchange rates; any extension of the currency controls in Argentina; technological and operational hazards in Fortuna's mining and mine development activities; delays in the construction at the Lindero Project, delays in the commissioning or commencement of commercial production at the Lindero Project; risks inherent in mineral exploration; uncertainties inherent in the estimation of mineral reserves, mineral resources, and metal recoveries; governmental and other approvals; political unrest or instability in countries where Fortuna is active; labor relations issues; as well as those factors discussed under "Risk Factors" in the Company's Annual Information Form. Although the Company has attempted to identify important factors that could cause actual actions, events or results to differ materially from those described in Forward looking Statements, there may be other factors that cause actions, events or results to differ from those anticipated, estimated or intended.

This news release also refers to non-GAAP financial measures, such as cash cost per tonne of processed ore; cash cost per payable ounce of silver; total production cost per tonne; all-in sustaining cash cost; all-in cash cost silver equivalent; adjusted net (loss) income; operating cash flow per share before changes in working capital, income taxes, and interest income; free cashflow from ongoing operations; and adjusted EBITDA. These measures do not have a standardized meaning or method of calculation, even though the descriptions of such measures may be similar. These performance measures have no meaning under International Financial Reporting Standards (IFRS) and therefore, amounts presented may not be comparable to similar data presented by other mining companies.