Jorge A. Ganoza, President and CEO, commented, "Financial results for the second quarter reflect our continued emphasis on free cash flow generation through organic growth and cost control. We have delivered a consolidated all-in sustaining cash cost of $17.41 per ounce of silver, a reduction of twenty one percent compared to the previous year, and year to date our treasury plus trade receivables have increased by over $20 million." Mr. Ganoza continued, "At San Jose, our attention remains centered on laying out the next phase of organic growth as our step-out drilling campaign at Trinidad North continues to expand the new high-grade mineralized zone."

** In the second quarter of 2013, the company recorded a $15.0 million non-cash impairment charge, offset by a $4.8 million deferred tax provision, related to Caylloma, and a non-cash write-off of mineral properties, plant, and equipment of $0.4 million related to the San Luisito concessions.

Adjusted net income rose to $2.9 million compared to an adjusted net loss of $0.1 million in Q2 2013 after adjusting for the write-off and impairment of mineral properties, property, plant and equipment (refer to non-GAAP financial measures).

Cash and short term investments at the end of Q2 2014 was $60.2 million, an increase of $11.1 million over year end 2013. In addition trade accounts receivable increased by $9.5 million most of which was credited to our treasury in July 2014.

In light of the growth of resources over the last year the company has made the decision to advance with engineering studies to address long term tailings management. The project calls for the implementation of filtered tailings and dry-stack disposal. The project is in the engineering phase with a construction decision expected before year end. 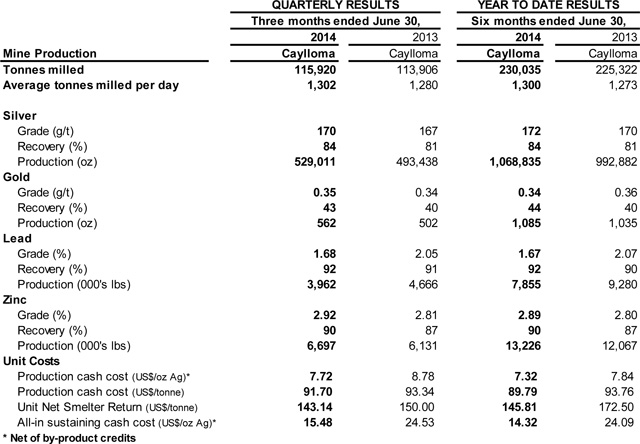